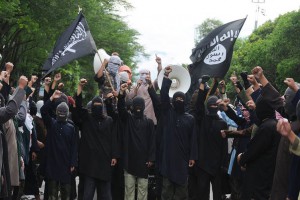 What began as an Afghan student protest against dormitory accommodations and meal policies this week turned into a pro-Islamic State demonstration, sparking fears of a spreading insurgency.

Students raised IS and Taliban flags at Nangarhar University in eastern Jalalabad city.

“By raising these flags of Islamic emirate, caliphate, Hezb-e-Islami, we want an Islamic state,” a student said on a loudspeaker as the crowd chanted pro-IS and Taliban slogans.

Some in the crowd wore masks similar to those used by IS and Taliban militants.

The protest over the weekend drew wide media coverage in Afghanistan and occurred in an area where IS militants have been fighting government forces.

Analysts said the incident at the university raised concerns that IS might have a growing following among disenfranchised Afghan young people.

“If voices are raised in university in support of the Taliban or Islamic caliphate or Hezb-e-Islami, I think it’s a weakness of the government, and the displeasure of people with the government,” Afghan journalist Nazar Mohammad Mutmaen told VOA’s TV Ashna.

It is widely believed that the Jamiat-e-Islah group, which wants a Muslim Brotherhood-style regime in Afghanistan, is active in the university, with influential faculty members publishing books and arranging seminars.

The government says it is taking the protest seriously. The provincial governor of Nangarhar met with the university president and representatives of the student association to try to alleviate concerns and to find out the extent of IS allegiance at the school.

“I can tell with confidence that these are limited [in the number of] people and the majority of students are against such actions,” he told VOA’s Pashto service, adding that he had asked security and intelligence agencies to investigate the incident and take whatever actions were needed.

In recent months, there has been an increase in IS violence in Afghanistan, especially in Nangarhar province, where fighters have launched multiple attacks on Afghan security checkpoints in recent days.

There are an estimated 2,000 to 3,000 IS militants in the country, according to intelligence reports.

Heavy fighting in recent days between Taliban insurgents and Islamic State militants has left at least 110 dead and dozens wounded in the southern Afghan province of Zabul.

IS on Tuesday released a 16-minute Web video in the Pashto and Arabic languages that IS says shows militant operations in Afghanistan, including the overrunning of a military checkpost and pictures of slain men who appear to be Afghan army troops.

The government in Kabul has not commented on the video.