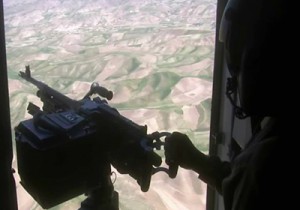 Local officials in western Ghor province on Saturday said that more than 100 insurgents were killed in clashes in Charsada district in the past six days.

Sayed Anwar Rahmati, the provincial acting governor said that Charsada is no longer in the hands of insurgents – following a six day battle by the national security forces to regain control. However, the bodies of numerous insurgents still litter the battle field, said Rahmati.

“We are saying to insurgents that we will kill insurgents in any way. Our message to them is to hand over weapons and join the peace process otherwise they will be killed,” Gen. Mahauddin Ghori, commander in chief of 207 Zafar military corps said.

This comes after Taliban insurgents attacked and took control of the district almost a week ago. But after heavy fighting troops regained control. It was reported earlier that police and troops had been surrounded by insurgents but once airstrikes were launched the situation was brought under control.

According to officials, this was the bloodiest attack in Ghor in the past thirteen years.

Fazul Haq Ehsan, the provincial council head, said that the number of security forces in the province is not enough compared to other provinces.

“If they don’t address this issue this will happen again especially as the Taliban has not been completely destroyed,” he said.