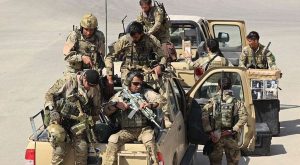 More than six hundred Special Forces of the Afghan intelligence agency have been deployed to Ghazni province, security sources said Monday, like reported by ariananews.af.

According to the sources, the National Directorate of Security (NDS) has taken the lead of the ongoing military operation in the province after three days of fierce fighting between the Taliban insurgents and government forces for control of the provincial capital of Ghazni city.

On Friday morning, Taliban launched their coordinated attack over the provincial capital.

Following that, army commandos were assigned to defend the city, but reports indicate that commandos have inflicted high casualties as well.

The displaced residents of Ghazni province who arrived in Kabul on Sunday claimed that major parts of the province have been collapsed to Taliban, expect the governor’s office and provincial directorate of security.

However, the army chief of staff, Gen. Sharif Yaftali rejected the claims during a press conference and said that the control of all strategic parts including the civilian and military institutions are under the full control of Afghan forces.