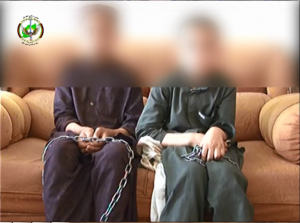 The National Directorate of Security (NDS) – Afghanistan’s intelligence agency – has rescued two children who were forced by Taliban militants for suicide bombing in southern Helmand province.

A statement issued Sunday by NDS states that Rahmatullah who is a Taliban commander took two children from Kandahar province to Helmand on the pretext of religious studies about a month before.

Rahmatullah told the family of nine year-old Fazal Amin and 12 year-old Mohammad Amin, both brothers, that the two will receive religious studies in a Madrasa (seminary) of Helmand province.

NDS statement adds that during the religious studies the children were forced to carry out suicide bombings.

The statement further adds both children were chained in order not to run away from Madrasa but they were rescued by NDS personnel during a special operation.

The kids have been returned to their families.

The statements issued by the National Directorate of Security usually do not contain the exact location of the achievements but they come after recent activities.