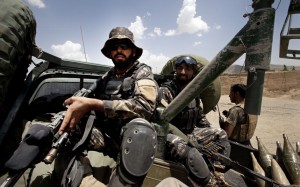 A statement issued by the NDS states that a militant hideout belonging to Mohammad Ali Amarati, a former Taliban commander who had joined Daesh, was raided in recovering two explosive vests, two Kalashnikovs and a PK machine gun.

According to the statement, insurgents belonging to this group planned to target government facilities but their plans have been rebuffed.

The statement further states that a gun battle erupted between the militants and security forces during this operation leaving two terrorists killed.

NDS Statement usually do not contain the exact date of the achievements but they come after recent activities.