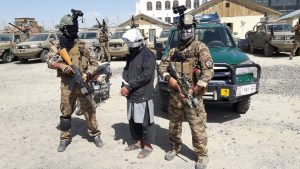 NDS’ special operatives clashed with Islamic State militants (Daesh) in the Mohmand district of eastern Nangarhar on Sunday night, like reported by khaama.com.

“Mahmood Jan”, the ISI-K district chief was killed during the operation.

Sources indicated that the killed individual was a well-known Daesh fighter and the group’s commander, who time to time plotted violent attacks on security forces.

Meanwhile, Mohammad Saber Tokhi an area representative in the Qalat district was targeted by an IED explosion.

Hekmatullah Kochi, commander of Zabul police told the media, that the incident happened at around 9:00 am this morning in the Chowk area in Qalat city.

Taliban took the responsibility for the attack.

This comes despite peace efforts in Afghanistan, just recently Los Angeles times reported that Gen. Kenneth McKenzie said that the war in the country will intensify and the Taliban could threaten major cities unless the Biden administration does not push for an end to the conflict within the coming two months.

LA TIMES quoted Gen. McKenzie saying: “If we withdraw and no deal was made with the Taliban, I think the government of Afghanistan is going to be in for a very stiff fight to retain possession of towns and cities”.

President Ashraf Ghani and General McKenzie had a meeting on Saturday in Kabul, both discussed the security situation, the peace process, and America’s support to Afghan national defense and security forces.

The war in the country is so complex at a level that Interior Ministry spokesman Tariq Arian said that according to the MoI investigations, a private media outlet was involved in the transfer of explosives.

He added there are serious questions in this regard and that MoI is working to find the desired answer for it.

Arian did not provide any further details about the media outlet.