You are here: Home / West Asia / Afghanistan: Marines’ mission in Helmand could be blueprint for Trump’s strategy 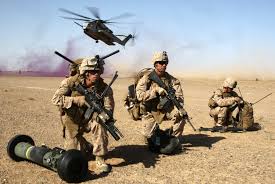 When U.S. Marines entered the Afghan military’s operations control center at an airfield here in April, they found a scene of confusion.

Afghan officers were coordinating operations against Taliban insurgents using paper maps taped to the walls. They were uncertain of the locations of key mosques, hospitals, bridges — even their own ground troops, like reported by stripes.com.

The war was going badly in Helmand, one of Afghanistan’s most volatile provinces and the deadliest for international forces in 16 years of hostilities. Since the Marines left in 2014 as part of a U.S. military drawdown, Afghan forces were losing scores of troops every month and had watched the Taliban march up to the outskirts of the provincial capital of Lashkar Gah, lobbing rockets inside the airfield.

Seven months after a Marine-led task force returned, Helmand has become one of the few bright spots in the Afghan War, offering a blueprint for President Donald Trump’s troop surge, which will raise the number of American servicemembers training and advising Afghan soldiers and police from 11,000 to about 15,000.

At the outset, a few dozen Marines moved into a series of low-slung buildings at Bost airfield outside Lashkar Gah, which houses an Afghan army brigade, the provincial police headquarters and the regional military control center. The Marines cleared cobwebs and old clothes out of a storage room and converted it into a mess hall where they dine on military rations, or eggs and instant noodles Afghans bring from a local market.

Next door, separated by a chain-link fence, is the control center where Marines have helped Afghan officers replace static maps with Google Earth, plot civilian buildings and ground troops with multicolored icons, and process intelligence from the field.

“We’ve seen them exponentially increase their ability to manage the battle space because they can visualize it,” said said Maj. Paul Rivera, a Marine adviser from Houston. “It’s like going from being color-blind to seeing in color.”

By re-engaging in Helmand, Rivera added, “it’s like we turned the lights back on.”

The U.S. military’s Task Force Southwest, led by 300 Marine advisers, has revitalized Afghan forces and increased airstrikes during a sustained government offensive that has pushed the Taliban away from major towns and highways and eliminated the threat to Lashkar Gah, according to U.S. and Afghan officials.

While the Marines’ deployment to Helmand took shape in the last months of the Obama administration, their mission encompasses one of the main goals of Trump’s troop surge, which Pentagon officials say is to get U.S. mentors out of large bases and closer to where Afghans are fighting in order to have a greater impact on the battlefield.

“I think we’re doing what’s in the new strategy now, within the capability and capacity we have,” said Brig. Gen. Roger Turner, commander of the task force based at Camp Shorab, a small outpost next to the sprawling emptiness of Camp Leatherneck, an abandoned base that once housed more than 20,000 NATO troops.

Roughly one-third of Turner’s troops have previously served in the province, etched in Marine lore for the bloody battles fought here in 2010 and 2011. Some 350 Americans lost their lives helping Afghan forces secure key districts — only to see many fall back under Taliban influence after they withdrew.

That has meant far fewer U.S. military fatalities in Afghanistan — 13 this year compared with nearly 500 in 2010, when there were 10 times as many American troops here.

But in a bid to break what Pentagon officials have described as a stalemate in the 16-year war, the Trump administration has expanded military commanders’ authorities to conduct airstrikes and deploy advisory units farther into the field, potentially putting them at greater risk.

Trump has set no end date for the troop commitment and Pentagon planners have declined to specify the numbers or destinations of the extra U.S. forces. That is a reversal from the Obama administration, which announced its intention to pull all U.S. troops out by 2014 before abandoning that plan when security deteriorated.

“The enduring commitment to Afghanistan is hugely impactful to our partners, and I think to the population it’s the same thing,” Turner said.

“I think they want us to be here and they want us to help make things better here. And I think it’s had an impact on the enemy too, because now they can’t just wait us out.”

When Marines and British troops departed Helmand in October 2014, the Afghan army and police proved incapable of holding the Taliban at bay. Resources were slow to arrive from the capital, Kabul, and security forces complained of not being paid on time. Morale sank and desertions soared.

Crucially, without U.S. trainers, the Afghans could not request American airstrikes. Holed up inside checkpoints, they were easy targets for insurgents who see Helmand as their cash cow: home to the poppy fields that produce more than three-quarters of the world’s opium, the Taliban’s most important source of revenue.

The month before the Marines withdrew in 2014, 39 soldiers from the Afghan army’s 215th Corps in Helmand were killed in action, according to U.S. military figures. During the same month of the following year, that number soared to 115.

The commander of Afghan police in the province, Maj. Gen. Ghulam Daoud Tarakhel, saw his headquarters at Bost come under a steady barrage of rocket fire from insurgents poised at the city limits.

“We couldn’t even stand outside,” Tarakhel said. “Mortars would hit this spot from every side.”

A small Army-led task force deployed to Helmand last year and began reestablishing links with Afghan soldiers based next to Shorab. It soon became clear that the Afghan commander was a big part of the problem. Appointed to purge the ranks of “ghost soldiers” — who existed only on paper so that corrupt officials could pocket their salaries — the commander, Maj. Gen. M. Moein Faqir, was arrested early this year on charges including stealing money meant to buy food for his men.

The Marines rotated in with a simple mission: keep Lashkar Gah from falling to the Taliban. They came just as a new Afghan commander was installed.

Maj. Gen. Wali Mohammad Ahmadzai, a burly, no-nonsense officer with a thick mustache, quickly forged a close relationship with Turner. He sometimes joined the blue-eyed, square-jawed general for strategy sessions over dinner at the Marines’ cafeteria, armed with large discs of Afghan flatbread.

In May, Ahmadzai impressed the Marines when he rode at the front of a convoy of Afghan troops as they fought to dislodge insurgents from Marjah, the poppy-growing town where nearly 50 Americans died in a major 2010 battle. In the months that followed, Marines advised Afghan operations to push Taliban fighters out of districts surrounding Lashkar Gah.

In July, with American F-16 jets and Apache attack helicopters supplying airstrikes, Afghan soldiers and police recaptured Nawa, a large town south of Bost airfield. They took down Taliban flags and presented them to their Marine advisers as gifts.

“We have seen some good changes under my leadership,” Ahmadzai said. “Generals who weren’t capable of doing the job were removed. And because the Marines have come back and supported us, we have been able to clear all the main roads in the province.”

The provincial government has begun to reopen schools and clinics in Nawa. Unlike in the past, when Marines tried to install basic social services in liberated districts, commanders are leaving governance to Afghan officials.

By aggressively attacking the Taliban, Reid said, the Afghans suffer fewer casualties. In the month ending Sept. 21, 36 Afghan soldiers in the Helmand-based corps were killed, the lowest total for that month in five years.

But the Afghans need American support to remain on the offensive. Pentagon officials say the troop increase will allow U.S. forces to reach beyond Afghan corps headquarters and into smaller bases to directly advise brigade and battalion leaders and coordinate more airstrikes.

Advisers have also helped the Afghans make better use of their burgeoning air assets, including surveillance drones.

One recent morning, two convoys of Afghan security forces traveling south toward Lashkar Gah came under fire from a house inside the village of Malgir. Inside a windowless, high-ceilinged room at an operations center near Shorab, Marines, Afghan officers, and American civilian contractors watched footage from a U.S.-made ScanEagle drone hovering above the village.

Once Afghan troops in the area determined the shooters’ location and that there were no civilians nearby, officers in the control room requested airstrikes, which were carried out by U.S. Apache helicopters. One of the shooters was killed, two were wounded and two escaped, said Afghan army Maj. Abdul Wakil.

“If it’s a steady target we can use an Afghan aircraft to strike them,” Wakil said. “If they are moving targets, we can use our Apaches.”

He shot a glance at the Marine major next to him and corrected himself: “I mean, the American Apaches.”

Afghans attribute their recent successes to the Marines. At a training facility outside Shorab, as recruits practiced infantry maneuvers in a dirt field, instructor Mir Ahmad Malangzai said that after he was injured in a roadside bomb blast last year, Americans trained him to teach a course in detecting explosives.

“It’s with the Marines’ support and cooperation that we’ve reached this level,” Malangzai said. “If they leave again, things will 100 percent be reversed.”

Commanders acknowledge that the task force’s young Marines, in particular, would rather be fighting insurgents themselves.

Marine Sgt. Andrew Comtois, adviser to Helmand’s fledgling sniper training program, served three tours in Iraq and deployed to Sangin in 2013, when Marines were beginning to pull back to Leatherneck. On his wrist, he wore a bracelet bearing the names of four friends who had been killed in Afghanistan.

“Being a sniper and being passionate, I would love to be back out there on the front lines fighting,” Comtois said. “But it’s not our fight anymore.”

He watched as a young Afghan soldier lay on the ground behind a rifle, aiming at a target painted on a trash can 110 yards away. When he arrived in Helmand last month, Comtois found that sniper students were given only 20 rounds of ammunition with which to practice, the result of supply shortages. Sometimes instructors didn’t set up targets, leaving students to aim their mock weapon into thin air.

“It’s a new process for them,” he said. “They’re still getting that discipline.”

Task force commanders expect that when they complete their deployment in early 2018, a larger group of Marines will follow.

“We’ve got a lot of blood, sweat and tears in the soil, a lot invested here,” Reid said. “If there’s a long-term strategy for Helmand to ensure that it’s a secure province where terrorists don’t have safe haven, the Marine Corps wants to be part of that solution.”