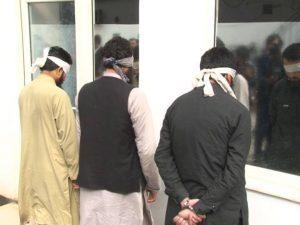 An explosives expert of Jundullah terrorist group was arrested along with a key Taliban commander in northern Samangan province of Afghanistan, like reported by khaama.com.

The Ministry of Interior (MoI) said the two militant leaders were arrested during the counter-terrorism operations.

The Jundullah explosives expert was involved in manufacturing Improvised Explosive Device to carry out roadside bombings in this province, MoI said, adding that an Ak-47 rifle was also confiscated from him together with a motorcycle.

According to MoI, the Taliban leader arrested during the operation has been identified as Esmatullah who was also famous as Jalali and was leading a group consisting twenty insurgents.

He was held during an operation conducted in the vicinity of Hazrat Sultan district, the ministry added.

The anti-government armed militant groups have not commented regarding the reports so far.

Samangan has been among the relatively calm provinces since the fall of the Taliban regime in northern Afghanistan but the anti-government armed militant groups have increased their presence and insurgency activities in some of its district as they continue to attempt in spreading violence in northern provinces of the country.