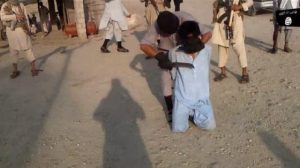 Islamic State militants on Tuesday beheaded a 12-year-old boy for supplying food to police in northern Jawzjan province, officials said according to pajhwok.com.

The militants accused the child of supplying food and non-food items to the police personnel. He was killed in line with a kangaroo court verdict.

Khashi remarked: “This is the worst crime committed in the province by Daesh militants, who have been hit hard recently by security forces.”

Meanwhile, Maghfirat Samimi, provincial head of the Afghanistan Independent Human Rights Commission, hit out at the IS for the grisly crime.

The boy, identified as Rahim, had been in Daesh captivity for a month before he was killed.