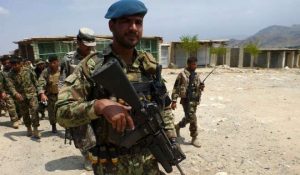 At least four militants affiliated with the Islamic State of Iraq and Syria (ISIS) terrorist group were killed during the operations in eastern Nangarhar province, like reported by khaama.com.

According to the local officials, the militants were killed during an airstrike conducted in support of the Afghan forces during the ground operations.

The provincial government media office in a statement said the operations were conducted in the vicinity of Haska Mina district.

The statement further added that four ISIS militants were killed after they came under airstrike in Payin area of the district at around 11 am local time on Tuesday.

According to the provincial government, the militants killed during the operation belonged to a ISIS group led by Abu Ali.

Several weapons and some ammunition belonging to the terror group were also destroyed during the airstrike, the provincial government added.

The anti-government armed militant and terrorist groups including ISIS group have not commented regarding the report so far.

This comes as counter-terrorism operations are underway against the Taliban, ISIS and other militants in some of the restive districts of Nangarhar.

The US forces based in Afghanistan also conduct airstrikes mainly using unmanned aerial vehicles to suppress the militants in this province.