You are here: Home / West Asia / Afghanistan, Islamic State and Taliban announced Jihad against each other 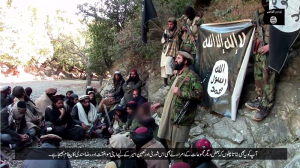 Mashaal Radio has published a report stating that Islamic State and Taliban group have announced Jihad against each other, according to Khaama.

Nabi Jan Mullahkhil, police chief of southern Helmand province has told Mashaal Radio during an interview that he has received documents in which both the terrorist groups have announced Jihad against each other.

Mashaal Radio which is related to Azadi Radio quotes Mullahkhil as saying when the matter of peace talks between government and Taliban comes into discussion some intelligence agencies make new groups to keep the war ongoing in Afghanistan.

Reports of minor clashes between the fighters of Taliban group and the newly emerged Daesh have published in the past.

Both groups oppose each other.

Al-Baghdadi has said that Mullah Omar does not deserve a spiritual or political credibility. While on the other hand Taliban fighters have been ordered by their leaders not to let Daesh flag raise in Afghanistan.