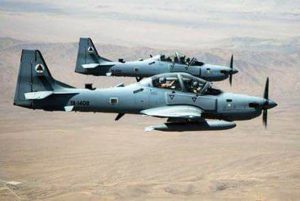 Several militants were killed in the latest airstrikes conducted by the Afghan Air Force in northern Faryab province of Afghanistan, like reported by khaama.com.

The 209th Shaheen Corps of the Afghan Military said Wednesday that the airstrikes were carried out in the vicinities of Pashtun Kot and Andkhoi districts.

The source further added that the Afghan Air Force targeted the militants’ hideouts using the MD-530 helicopters, leaving at least three dead and five others wounded.

According to the Shaheen Corps, several weapons, ammunition, and explosives belonging the militants were also destroyed.

In the meantime, the Afghan Air Force targeted the Taliban hideouts in the vicinity of Pashtun Kot district, resulting into the killing of at least 24 militants.

The Shaheen Corps of the Afghan Army said at least five militants were also wounded in the same airstrikes and two hideouts of the Taliban were destroyed.

The anti-government armed militant and terrorist groups including Taliban insurgents have not commented regarding the report so far.

This comes as the Afghan armed forces are busy conducting counter-terrorism operations in certain northern provinces as the militant and terrorist groups are attempting to expand their insurgency activities in the north.