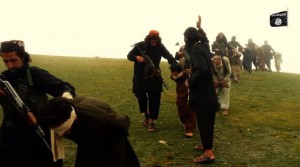 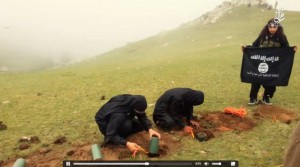 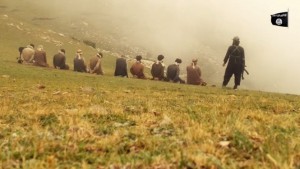 The Islamic State of Iraq and Syria (ISIS) terrorist group has released a new execution video claiming to be filmed in eastern Nangarhar province of Afghanistan.

The video, too much horrific to be published, was posted by the affiliates of the terror group who claim to be part of the group’s Khorasan province.

A group of ten men is shown being blown up after forcing them sit on Improvised Explosive Device (IED) planted beneath them in the ground.

They have been accused of supporting the Taliban militants in their fight against the ISIS affiliates and being the supporter of ISI.

The authenticity of the video has not been verified so far although the affiliates of the terror group is active in a number of the remote areas of Nangarhar province.

The latest gruesome video is published almost a month after the terror group released a shocking video which purportedly showed the beheading of an alleged spy in eastern Nangarhar province.

The video was shared by the ISIS supporters in Afghanistan claiming that the man was executed in Ghani Khel district over espionage charges.

The group also claimed that the man was providing information regarding the group’s locations by carrying a tracking device for drones.

This comes as the terror group received numerous blows following airstrikes and military operations by conducted by the Afghan forces and coalition security forces lately.

The group’s Khurasan province chief was killed along with 30 militants in a drone strike in Nangarhar province last month.

The Afghan Intelligence – National Directorate of Security (NDS) said Hafiz Syed was killed after the Afghan security forces provided information regarding his location to the coalition security forces.

was the second highest affiliated ISIS leader killed in Afghanistan during the past one week. A senior commander of ISIS Shahidullah Shahid was killed in a drone strike in eastern Nangarhar province last week.

Acording to NDS, Shahid was killed in a drone strike in Achin district. He was a spokesman for the Tehreek-i-Taliban Pakistan (TTP) who later pledged allegiance to ISIS terror group.

He was one of the few senior members of TTP who joined Daesh when it first emerged in the region few months ago and was planning to engulf a widened war in the region and play a central role for the terror group.