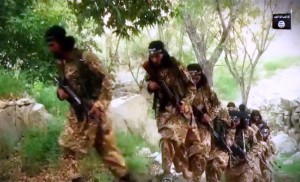 The loyalists of the Islamic State of Iraq and Syria (ISIS) terrorist group executed a Mullah Imam in eastern Nangarhar province of Afghanistan.

According to the local government officials, the incident took place in Achin district and the victim was teaching a Madrasa and originally hailed from Pakistan’s Swat valley.

The main motive behind the killing of the Mullah Imam has not been ascertained so far which comes the loyalists of the terror group have executed numerous people besides dozens of others are kept in their private prisons.

In the meantime, the district administrative chief for Achin Haji Ghalib Mujahid said the family members of the victim were forced to leave their home after he was shot dead.

He said a gun battle also broke out after the ISIS loyalists attacked the house of the Mullah Imam and preliminary reports suggest at least one ISIS fighter was killed adn three others were wounded.

The ISIS loyalists are believed to be mostly the members of the Pakistani Taliban group – Tehrike-e-Taliban Pakistan.

The Afghan ambassador to Pakistan Janan Mosazai said earlier the militants of Tehrik-e-Taliban Pakistan (TTP) are shifting over to the Islamic State of Iraq and Syria (ISIS) terrorist group.

Speaking during a seminar on Countering Violence Extremism, Mosazai said the former TTP militants have infiltrated into Nangarhar province and switched over to the black flag or Daesh, which we have been containing,” Mosazai quoted by local media reports said.

Mosazai warned that that the terror group was spreading “its propaganda and obscurantist worldview” also in Pakistan, similar as other parts of the world.