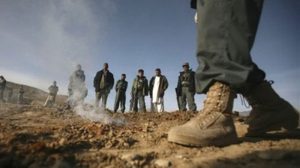 At least three children were killed in an explosion triggered by an improvised explosive device (IED) in eastern Nangarhar province of Afghanistan, like reported by khaama.com.

The provincial government media office in a statement said the incident took plae at around 10 am local time in Haska Mina district on Sunday.

The statement further added that the IED was planted by ISIS militants on a main highway in Shirullah area and was detonated while the children were crossing the area.

According to the provincial government, the children killed during the explosion are between 12 to 13-year-old.

The anti-government armed militant groups including ISIS militants have not commented regarding the report so far.

This comes as counter-terrorism operations are underway in Haska Mina district to eliminate the ISIS militants who are attempting to expand their foothold Haska Mina and other parts of the province.

The provincial government said Sunday at least 9 ISIS militants were killed during the operations and airstrikes in Haska Mina district a day earlier.