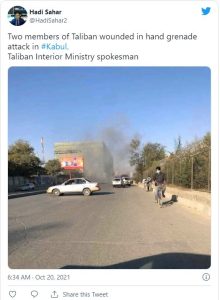 A grenade was thrown at a Taliban vehicle in the Afghan capital on Wednesday morning, wounding two fighters and four nearby school children, government officials said.

The explosion happened just before 8 am (0330 GMT) during rush hour in the Deh Mazang district in the west of the capital, a witness told AFP.

“I was on my way to work, it was 7.55 am and I heard this very big explosion on the road. I managed to escape,” said Amin Amani.

“I saw a lot of smoke in the mirror of the car and I saw people running,” the 35-year-old translator said.

Images shared on social media showed plumes of smoke and dust rising into the air on the streets of the capital.