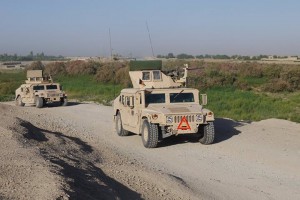 On Sunday an American news agency published a news story about critical security situation in southern Helmand province. However, it emphasized on percentage of the yet to be proved “ghost soldiers”. The information seemed inaccurate because it was based on the statement of the provincial council’s chief Karim Atal. In journalism authentic written data with proper attribution has more credibility than statements. It is also unclear that whether Atal was talking about the so-called ghost soldiers and policemen in his province or the percentage applies to the whole country. According to him, around 40 percent of the registered forces only remains on papers and had no existence. The provincial council’s head claimed that only eight or ten soldiers were present at a checkpoint where 20 soldiers should be present. The statement made laymen and analysts totally confused because it does not tell that whether he is talking about police force or the national army or both.

Although, the interior ministry’s spokesman Sidiq Sidiqi tried to end the confusion by providing details about the digitally registered police, but the key question remains unanswered—from which source Karim Atal obtained the data. Knowing the source is of utmost importance to determine credibility of the statement and authenticity of the statistics. The uncertainty will remain unless the high-ranking security officials ask the provincial council’s chief to share the data with them. The report about the ghost soldiers has given birth to several questions such as that if it is about the Afghanistan National Security Forces (ANSF) then there should be 140, 000 ghost soldiers. The total number of Afghan security forces stands at around 350, 000.

If the percentage is about security forces in Helmand then how could we apply this to the whole country? Even if it is about the restive province and only the police force, the nerve-wrecking question is that why the Taliban failed in the past 14 years to control the whole province. The Taliban established foothold in some areas of the province last year because the defense ministry is run by a caretaker. It is failure of the government for which we should not blame the security agencies. Moreover, if there were ghost soldiers in the province then by now the insurgents would have totally controlled the entire Helmand. There is another question that yet to be answered that how could so many ghost troops remain unnoticed in the past several years.

It seems that the intention of the report was to cause panic. It worked well. On Sunday it did not include complete statement of the Interior ministry’s spokesman, but on Monday it did. Earlier, the same news agency published an interview with the Taliban’s leader Mullah Mansoor. However, the militant group issued a statement and said that it was fake one because no one had access to their supreme leader. The blatant lie exposes the true face of the American corporate media. The government shall launch probe into the report in order to tell the public that ghost soldiers really exist or not.