You are here: Home / West Asia / Afghanistan, Ghani: “We will respond to war with war” 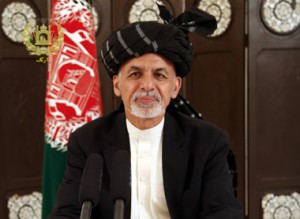 Ghani said on Thursday, in his Ramazan message to the nation, that the Afghan government wants peace but that the Taliban’s war on the country will be responded to with war.

Ghani also called on security forces to ramp up efforts to secure the country so that the public can engage in their daily prayers and routines in peace.

Ghani’s statement appears to be in response to the Taliban’s rejection of a ceasefire request.

However, Ghani continues to call for peace and called on insurgents to join the process. “They don’t have any way to escape the prayers of upset mothers and orphans, and they cannot get rid of the anger of our devoted and patriotic soldiers who are ever ready for tackling insurgents,” said Ghani.

Ghani reiterated that war has been inflicted on Afghanistan and its continuation will increase poverty in the country.

He hinted at a charity fund for bereaved families of Afghan security forces and said it will collect donations during Ramazan. “At least Afs90 million has been prepared to kick-start the process of collecting funds for bereaved families of security troops. This will come into effect during Ramazan,” he said.
Critics believe that the move by the president is crucial in supporting the morale of the security forces.

Assadullah Walwaji, who participated in talks with the Taliban in Dubai, said this is war; the government should find those who don’t want peace, and it should turn against them and tackle them.