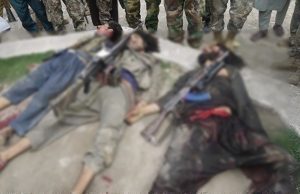 Fresh clashes have erupted among the Taliban militants and the Islamic State of Iraq and Syria Khurasan (ISIS-K) militants in eastern Nangarhar province of Afghanistan, like reported by khaama.com.

The 201st Silab Corps of the Afghan Military in the East said the latest clashes have erupted between the two sides in Deh Bala district.

The source further added that the latest clashes have left one ISIS militant dead so far.

In the meantime, Silab Corps in a statement said the US forces have also conducted an airstrike in Deh Bala district, leaving one ISIS militant dead.

The anti-government armed militant groups including Taliban and ISIS loyalists have not commented regarding the report so far.

Nangarhar has been among the relatively calm provinces since the fall of the Taliban regime in 2001 but the anti-government armed militants have been attempting to expand their foothold in this province during the recent years.

However, the Afghan armed forces are busy conducting counter-terrorism operations to suppress the militant groups.

This comes as scores of Taliban and ISIS militants were killed during the similar clashes in northern Jawzjan province of Afghanistan few weeks ago.

At least 250 ISIS militants also surrendered to the Afghan forces after their main stronghold was overrun by the Taliban militants in Darzab district.