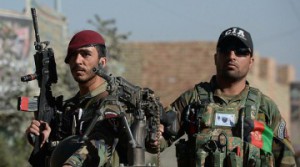 Four soldiers have embraced martyrdom while 44 militants were killed during separate military operations across the country in past 24 hours, Ministry of Defense announced on Wednesday.

General Zahir Azimi, spokesman for the ministry tweeted this morning about the martyrdom of four Afghan National Army soldiers due to landmine explosion and insurgent fire in past 24 hours but he has not written the exact location of the incidents.

He states in another tweet that 44 militants were killed and 74 others wounded during military operations in the same period of time.

Azimi says 21 Improvised Explosive Devices (IEDs) were also discovered and defused by the military during these operations.

After taking full responsibility of the security from NATO forces at the beginning of this year, Afghan forces began large-scale operations against insurgents.

Insurgents have suffered heavy casualties and some areas held by them for years have been taken back by Army during these operations.