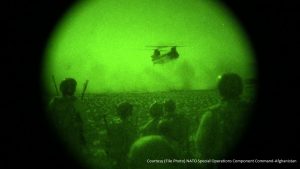 The foreign forces have stormed the hideouts of the Islamic State of Iraq and Syria Khurasan (ISIS-K) in eastern Kunar province of Afghanistan, leaving a number of militants dead or wounded, like reported by khaama.com.

The local officials in Kunar said the operations were conducted late on Sunday night in the vicinity of Watapur district.

Provincial Security Chief Amir Mohammad Zaman confirmed the raid and said at least three ISIS Khurasan militants were killed during the raid and two others were arrested.

He said a commander of the terror group identified as Abuzar was among those killed during the operations.

In the meantime, the 201st Silab Corps of the Afghan Military in the East said the U.S. forces based in Afghanistan carried out airstrikes using unmanned aerial vehicles, targeting the ISIS militants in Watapur district that left at least two dead.

The anti-government armed militant groups including ISIS Khurasan loyalists have not commented regarding the report so far.

Kunar is among the relatively volatile provinces in East of Afghanistan where both the Taliban, ISIS Khurasan, and militants affiliated with the Al-Qaeda terrorist network are active in some of its districts and often carry out terrorist related activities.