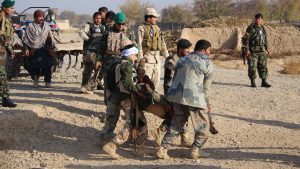 Unidentified gunmen killed a female police officer in the eastern Afghan city of Jalalabad Thursday, officials said, the second deadly attack against women in the city in a week as a spate of targeted killings spreads fear in urban centres, like reported by thenews.com.pk.

The body of a female police officer was taken to a city hospital in Jalalabad, the capital of eastern Nangarhar province, said Gulzad Sangar, a hospital spokesman.

Farid Khan, a provincial police spokesman, said two suspects were arrested in connection with the incident, but didn’t provide details. “She was on the way to her job when gunmen attacked her,” he said.

On Tuesday, unknown gunmen shot and killed three women vaccinators in Jalalabad. That incident came less than a month after three female media workers were killed in an attack claimed by Islamic State militants.