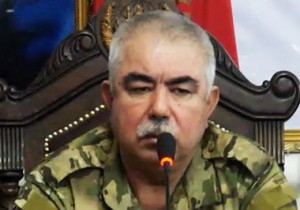 Speaking at a press conference in Sheberghan, the provincial capital, Dostum said he would also launch an operation in Faryab’s Ghormach district – where Taliban have seized control of several government facilities.

“We know that the Taliban has taken control of a few government buildings in Ghormach,” Dostum said, adding that they were in contact with the military forces stationed in the embattled district.

He said Ghormach will soon be cleared of insurgents. However he maintained that he was waiting President Ashraf Ghani’s order to begin the offensive.

“I am not here to sit in Jowzjan,” Dostum said. “I will lead the security forces [in Ghormach] to launch operations against the insurgents.”

He stated that the insurgents will not last long in Ghormach and will not be able to stand up against the security forces.

Dostum is accompanied by a number of government officials whom he says will assess the security situation in the northern provinces.

He is expected to launch military operations in Jowzjan, Faryab and Kunduz.

This comes about a month after Dostum visited Faryab and spent about four weeks there to clear insurgents.

He had reportedly cleared a number of districts in Faryab, however, the insurgents again stormed the area after Dostum returned to Kabul.