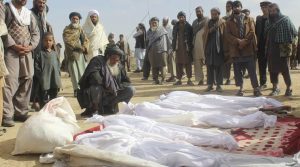 Deadly clashes broke out between the Taliban insurgents and militants affiliated with the Islamic State of Iraq and Syria (ISIS) terrorist group, leaving several dead from both the sides, like reported by khaama.com .

He said the militants of both the groups exchanged heavy fire in Suri Village, Judri, Saleh Baba shrine, and Wachi Lagadi areas.

Khogyani further added that so far 12 ISIS militants have been killed and two others have been wounded and two civilians were also killed.

At least three Taliban insurgents have also been killed during the clashes, Khogyani said, adding that hundreds of families have been forced to flee from the area.

He promised that the Pacher Agam areas where the militants are conducting insurgency will be cleared in the near future.

The ISIS loyalists have long been attempting to gain foothold in the strategic Pacher Agam district in a bid to expand their presence and operations in this province.

The deputy house speaker of the Afghan parliament Zahir Qadir earlier had warned that the loyalists of the terror group are attempting to establish the Khurasan Caliphate in Afghanistan and are busy expanding their presence in some of the difficult terrains of the country.