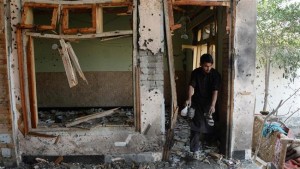 He said that most of the families had fled the Baba Ghonid area recently due to conflicts.

During torching no family were in houses, so there is no human casualties in the area, he added.

He stated that the familieshad transferred households’ goods with them during conflict to a safe area as well, so no more financial loses caused in the incident in Kot district.

He termed torching of residential houses by Daesh fighters an atrocity and horrible act, adding that militant want to create fear among locality people in the area.

He insisted that Daesh will never reach their goals through such cruelty acts in Nangarhar province.

According to some report Daesh fighters are active in some district of Nangarhar province particularly in Kot and Achin district and they are struggling to recruit people in the area.

The security forces as well as the US forces are regularly conducting counter-terrorism operations to root out the loyalists of Daesh terrorists who are attempting to expand foothold in the country.

In October 2016, the terrorist group has carried out complex attacks on Pachir Wa Agam district in Nangarhar province.

The district lies in the southeast of the province, sharing border with tribal areas along the Durand Line. The terror outfit torched several houses and killed civilians last year in the district.

He said that Daesh was attempting to deploy foreign militants mainly citizens of Syria, Iraq, Lebanon, Tajikistan, Uzbekistan and Chechnya in the northern areas, where Dostum is personally leading military operation against terrorists.

Moreover, Afghan security forces with the support of foreign troops had carried out counter-terrorism operations and pounded Daesh fighters’ positions. The operation conducted with the aim of suppressing the activities of Daesh fighters in the province.