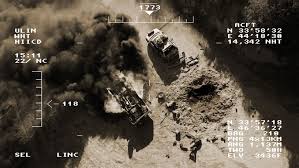 Seventeen Islamic State (Daesh) fighters were killed during a drone strike by foreign troops in the eastern province of Nangarhar on Friday, an official said.

The airstrike came as Daesh militants beheaded seven Taliban and an Afghan National Army (ANA) soldier in front of a mosque after Juma prayers in the Maktab village of Achin district.

A resident of the area, Abdul Qayyum, told Pajhwok Afghan News the group’s supporters publicly decapitated the eight men. A large of villagers had gathered to watch the beheading.

A large number of Daesh members and civilians suffered casualties in the strike, he said, without giving exact figures.

Attaullah Khogyani, spokesman for the Nangarhar governor, confirmed the drone attack in the district near the Pakistani border. However, he had no information about fatalities and injuries.

A security official in the district, meanwhile, confided to Pajhwok the raid left at least Islamic State rebels dead. The fatalities included a Pakistani doctor, he revealed.

With Taliban and Daesh yet to comment on the incident, the source said two civilians were wounded in the airstrike. He also verified the eight beheadings.