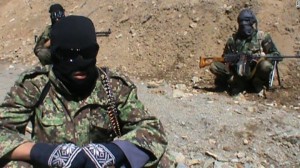 Seven Taliban militants have been killed during clashes with the rival group of Daesh in eastern Nangarhar province.

The clashes erupted in Chel Dara, Morgi and Wadichar areas of Shirzad District yesterday afternoon and continued until midnight.

Mashouq, the governor of Shirzad District said that Haqyar, a Taliban commander, was among the seven fighters of Taliban killed during the clashes.

According to the governor of Shirzad District, Daesh group has also sufferred casualties but he did not have a specific number.

Both the Taliban and the newly emerged group of Daesh under the name of Khorasaan have annouced Jihad against each other.

As per the recent reports, Daesh killed ten fighters of Taliban including a commander who had rejoined the group after separating ways with Daesh, also in Nangarhar province.