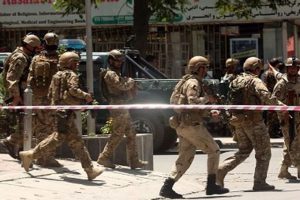 Multiple rockets landed near the diplomatic area of Afghan capital Kabul in a series of attacks on Tuesday morning. Two insurgents have been killed so far in clashes with security forces that followed, reported TOLOnews. The clashes are still going on, according to scroll.in.

At least 12 rockets exploded in the area, according to officials. Residents in the area, however, claimed there were 22 explosions.

The attack started at about 9 am (10 am Indian time) when President Ashraf Khani was delivering his message ahead of the Eid-al-Adha festival. The first rocket was fired near the Presidential Palace, and the second near a compound of the North Atlantic Treaty Organisation and the American embassy, according to AP.

Security forces surrounded a house from where they believe the rockets were fired.

“This morning a group of terrorists took over a building in Reka Khana and fired several rockets towards Kabul,” Interior Ministry spokesperson Najib Danish told AFP. “Two people have been wounded. Security are fighting the terrorists.”

Ghani said in response: “If they are thinking the rocket attack will keep Afghans down, they are wrong.”

In a similar attack on July 24, at least three people were injured in a series of rocket explosions in and around a residential area in Kabul. Five rockets were fired in a 75-minute period.

On Sunday, Ghani had declared a “conditional” ceasefire with Taliban militants ahead of the Eid-al-Adha festival. The ceasefire started on Monday and will be in place for around three months, “provided the Taliban reciprocate”, he had said.