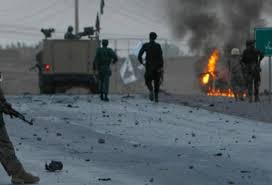 The explosion occurred late on Sunday night, in Kandahar’s Maiwand district. Among those killed were two women and a child, reports say.

According to a source at Mirwais Hospital in Kandahar, the 38 wounded, including 20 security personnel, have been transferred to the hospital.

In recent days, heavy clashes between the Afghan National Security and other groups have been underway in the Arghandab district of southern Kandahar province.

The clashes broke out five days ago after a large number of insurgents attacked dozens of security outposts in Arghandab, Panjwai, and Zherai districts, AVA Press reported.

Security officials stated that dozens of Taliban militants have been killed in skirmishes but they did not provide details about casualties among the Afghan forces.

Jamal Nasir Barikzai, a spokesman for Kandahar police told Ariana News that at least 75 Taliban fighters have been killed in these districts so far.

Meanwhile, the clashes have also displaced dozens of families. They stated that they have left everything behind and there is no hope of returning as “our houses and gardens are being used as strongholds.”