You are here: Home / West Asia / Afghanistan: bodies of 9 civilians abducted by Daesh found in Achin 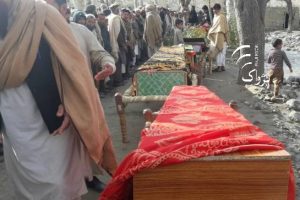 The bodies of nine civilians kidnapped by Islamic State (Daesh) militants have been found in eastern Nangarhar province, an official said on Monday, like reported by pajhwok.com.

The victims were among a dozen tribal leaders abducted in the Seh Paye area of Kot district nearly 18 months, the governor’s spokesman told Pajhwok Afghan News.

Attaullah Khogyani said nine of them were killed and buried in a mass grave in the Mamond Dara locality of Achin district. The men were laid to rest in Kot today.

Meanwhile, an Achin-based official said the men had been killed by Daesh insurgents three months after they were abducted. Security forces found the bodies during an operation in the area.