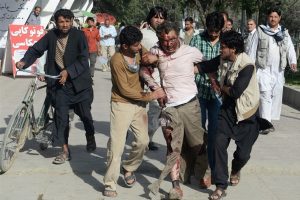 According to the spokesman, militants planted an explosive device in the involved bicycle parking next to a gas-selling shop in Police District 7 of Kandahar city.

Three of the injured persons were in critical condition, the official said, adding that investigation was underway on the incident.

Kandahar is a former stronghold of the Taliban militants and has seen increasing militancy over the past few years.