You are here: Home / West Asia / Afghanistan: at least six killed in attack at Shi’ite mosque in Kabul 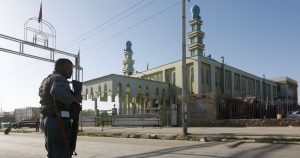 At least six people were killed in Kabul on Thursday in an attack at a Shi’ite mosque, reported TOLOnews. The attack was carried out by two gunmen and a suicide bomber. The Islamic State group has claimed responsibility for the attack.

The gunmen first tried to enter the al-Zahra mosque, but were stopped by security forces. It was followed by an explosion at around 9 pm, reported Reuters. The incident took place when people had gathered at the mosque to observe Lailatul-Qadr (night of power), held during the holy month of Ramzan.

One of the gunmen was shot dead by security forces during the gun battle that ensued. The police has cordoned off the area.