You are here: Home / West Asia / Afghanistan: at least 27 children killed, 136 wounded by Taliban in past 2 days 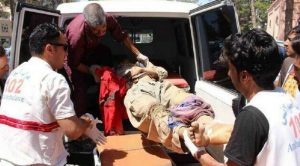 Rising violence in Afghanistan is taking a devastating toll on children, with 27 killed and 136 more wounded in the past two days alone, said the UN according to yenisafak.com.

As the advancing Taliban engage in a deadly turf war with Afghan government forces, UNICEF said: “Each one of these deaths and each case of physical suffering is a personal tragedy. These children are much loved and longed-for daughters and sons, brothers and sisters, cousins and friends.”

On top of this appalling situation, UNICEF said in a statement that it is also deeply concerned about reports that children are, increasingly, being recruited by armed groups.

“Only a complete end to hostilities can protect Afghanistan’s children. As long as the conflict rages, children’s right to thrive is compromised, their futures jeopardized, and their contributions to their nation’s prosperity diminished,” it warned.

The restive southern Kandahar province is among the worst hit in terms of child victims of the war.

Dr. Mohammad Dawood, head of a regional hospital in Kandahar, told Anadolu Agency that at least 20 children lost their lives in the past week here.