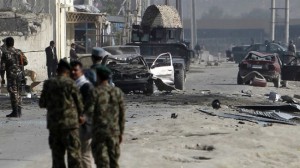 At least 17 people were killed and dozens others wounded after a heavy explosion rocked Matoon, provincial capital of Khost province this morning, Khaama reported.

The explosion has taken place among civilians who wanted to take part in the demonstration against the acting provincial governor of Khost province.

Member of Parliament Hamayoun Hamayoun is reportedly among the ones wounded.

Hamayoun Hamayoun is the Head of Defense Committee of Parliament.

No group has immediately claimed responsibility for the attack.