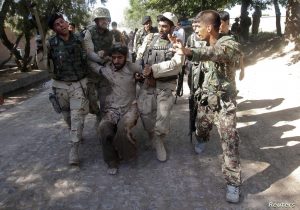 The Ministry of Defense in a released statement announced the arrest of the Taliban intelligence chief for Nangarhar province, like reported by khaama.com.

The ministry stated on Monday, that Afghan commandos launched an operation in the Shirzad district of Nangarhar province.

During the defense operation, Shafiqullah, the Taliban’s intelligence chief for the province, was arrested along with two other suspects, according to the statement.

Ministry of Defense also stated that at least ten Taliban insurgents were killed and a car bomb incident was prevented during ANDSF operations in southern Kandahar province.

In the past 24 hours, Afghan national defense and security forces backed by air support conducted security operations in Arghandab, Panjwai, and Maiwand districts of southern Kandahar province, MoD said in a statement.

During the operations 10 Taliban militants were killed, 3 others were wounded, a motorbike and some quantity of weapons and ammunition were also destroyed by the ANDSF members.

ANA also discovered and defused a number of IEDs in the regions where defense operations were launched.

A Taliban explosive-laden vehicle was also wrecked before it could reach its target, preventing a bloodstained incident from occurring which resulted in saving the lives of hundreds of innocent civilians, MoD stated.

This comes as peace efforts continue but violence across the country intensified, causing many fatalities and losses.