Afghan CEO Abdullah Abdullah on Tuesday addressed delegates at the Counter-Terrorism Conference 2016 in Jaipur, India, and called for a joint counter-terrorism action plan to be formulated and implemented by regional countries. 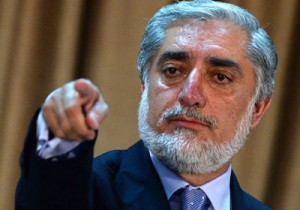 “The failures to follow through, the missed opportunities for regional cooperation, and the continued pursuit of zero-sum policies characterize these three eras. And together they have contributed to creating an enabling environment for terrorism and its utilization as an instrument of state policy,” he said.

Abdullah went on to say that before the imposed conflicts, Afghanistan used to be one of the most peaceful countries in the region, despite rife poverty. “But we became one of the last victims of the Cold War, as the former Soviet Union invaded and occupied our country.”

“In defense of our sovereignty and freedom, the Afghan people rose in resistance against the Soviets. And in our just war of liberation, we relied on those in the international community that shared our values and offered us resistance support,” he said.

Abdullah went on to say that the end of the Cold War led to a power vacuum not only in the region but across the World and that regional players began to act irresponsibly in an effort to protect their self-interest and to strengthen their strategic position in their respective regions.

“In effect, the end of the Cold War ushered in the beginning of regional cold wars, as opposed to a level playing field for regional cooperation.”

But the situation has yet to change, even though lip-service is often given in support of a paradigm shift to results-oriented regional cooperation, he said.

Considering this dynamic, we are effectively facing a regional cold war where terrorism has become the principal instrument of projecting influence by some states against others, he said.

“As a consequence, there is no universal appreciation of the grave danger, which terrorism poses to regional stability and international peace and security.”

Although nations generally agree that terrorism threatens the security of the whole humanity, each state is developing its own homegrown capabilities to tackle the direct threat it faces within its milieu. They have been reluctant to adopt and implement a global counter-terrorism action plan, even though terrorism sees no borders, nationalities, religions, creeds or cultures, he said.

“I propose that each region assess the set of threats terrorism poses to their security and development and then agree to draft and implement a joint a counter-terrorism action plan,” Abdullah added.

“If the states in the region have the appropriate counter-terrorism policies and laws; if they operate at home based on a common definition of terrorism; and if they have multilaterally reached a consensus on the nature of the threat and the need to counter it; then what bars us from collectively acting against terrorism, as we have witnessed the tragic terrorist attacks claiming many innocent lives in Kabul, Mumbai, Peshawar, Paris, Ankara, San Bernardino (California), and so many other places?”

“In simple terms, why can’t we regionalize our national counter-terrorism action plans?” he asked.

Abdullah said the regional mechanisms of such a cooperation are already in place including the The Heart of Asia Process, the Shanghai Cooperation Organization (SCO), and the South Asian Association Regional Cooperation (SAARC).

“But we should operationalize these mechanisms, which Afghanistan has often demanded and stood ready to do our part in utilizing them for effective regional counter-terrorism cooperation, he said.

Abdullah also raised the issue of peace talks and said: “As our brave forces continue fighting terrorism, we have relaunched a peace process. Our peace efforts are aimed at meeting the desire of every Afghan for freeing our country from an endless cycle of war and violence and to prevent the use of our soil as a platform for regional and global terrorist activities.”

He went on to say that: “On peace with the Taliban groups, our position is clear: Those Taliban groups, who are willing to join the process, they are welcome. While those, who refuse to do so, would be dealt with militarily.”

He said government does not differentiate between the Taliban and Daesh affiliated groups, and are firmly committed to fighting and defeating any militant groups that share the ideology of Al Qaeda and Daesh.

“As we continue our peace efforts, we invite all our neighbors to cooperate with Afghanistan. The National Unity Government of Afghanistan has repeatedly called on all stakeholders, including our neighbors, to commit the collective will and resources to confront what is a common security threat. Afghanistan has done more than lion’s share,” he said.