You are here: Home / West Asia / Afghanistan: 91 dead as Taliban-Daesh clash goes on in Jawzjan 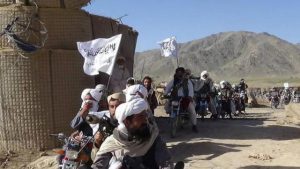 They were killed along with 76 associates and another 57 Taliban men were wounded. Daesh also lost 15 fighters with another 12 wounded.

The clashes were still underway and 45 motorcycles, three vehicles, weapons and ammunition remained on the battlefield.

The bloody encounter followed the kidnapping of three drug smugglers by Daesh loyalists in Dasht-i-Lali area of Qush Tapa district, according to the gubernatorial spokesman.

Rahmatullah Husher, the Darzab district’s administrative chief, said the three smugglers had arrived from western Herat and southern Helmand provinces to Dasht-i-Laili for a deal against 10 million afghanis with the Taliban.

But the smugglers were later kidnapped by Daesh along with a vehicle and weapons, the district chief said, citing it a reason behind the clashes.

The Taliban repeatedly asked Daesh to release the kidnappers, but their request was ignored and then the Taliban decided to face Daesh.

The Taliban came under Daesh attack when they entered Darzab district and a fierce firefight ensued and was still ongoing.

Sufi Mohammad, a resident of the locality, said the bodies of slain militants were still lying at the site.

He said local residents could not differentiate between dead bodies of the Taliban and Daesh.

He said a Taliban commander, Haji Nokur, was among the captives. He said local residents were leaving their homes and trying to escape the area.

Zabihullah Mujahid, Taliban’s spokesman, said they were trying to contact their fighters at the site but a contact was yet to be established. He promised updates to the media about the developing story as soon as possible.