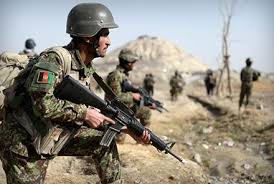 Seven Afghan National Army (ANA) soldiers and two Afghan Local Police (ALP) personnel have been killed during a clash in Dashti Archi district of northeastern Kunduz province, an official said according to pajhwok.com.

He added Taliban insurgents also seized some weapons and a Haumavee from Afghan forces and torched two security posts.

He said Taliban militants had also suffered heavy causalities but he did not provide exact figures.

Akhtar Mohammad, a resident of the area, confirmed the firefight between security forces and Taliban militants and said the clash continued until Tuesday morning.

He said, “I personally have no information about casualties, but I saw a number of Taliban militants onboard on a Humvee vehicle and they possibly going somewhere for attack other Afghan forces.”

On the other hand, Taliban militants also confirmed the clash and the group spokesman Zabihullah Mujahid claimed killing 19 ANA soldiers and 11 ALP personnel in Adisa locality of the district on Monday night.

He did not provide information about the Taliban causalities.