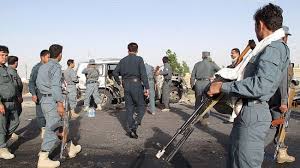 Eight security personnel have been killed and two others injured in firefights with Taliban insurgents in Badghis and Ghor provinces, officials said Monday according to pajhwok.com.

Six policemen were killed and four others went missing as a result of a fierce clash with the Taliban in the Aab-i-Kamari district of Baghis province.

Also on Sunday night, two more policemen were killed in a similar gunbattle in Ferozkoh, the capital of Ghor province.

The clash in the Bara Khana area of the city left two other policemen wounded, said Fazl-ul-Haq Ehsas, the provincial council chief.

There was no immediate reaction from the Taliban, who have stepped up attacks in different parts of the country, despite peace talks with the government.