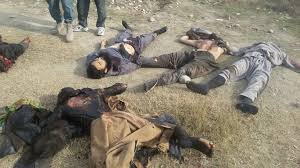 The Ministry of Interior Affairs released a list of 70 Taliban commanders killed in Afghanistan’s war-torn provinces of Helmand and Kandahar in operations carried out by Afghan forces in response to attacks by the group that started more than a month ago, reported TOLO News.

According to the ministry, 20 of the Taliban commanders belonged from various parts of Helmand and were leading groups of 45-100 members.

The list also described that 10 commanders killed in Helmand came from Uruzgan, Kandahar and Ghazni to help their fighters in Helmand.

At least 30 Taliban commanders were wounded in Helmand clashes, Arian said, adding that Taliban attacks were repelled by Afghan forces in Helmand, Kandahar, and other southern provinces under the active defense framework.

Although clashes are ongoing in southern provinces, Arian said that the Taliban has been defeated in the provinces.

Arian said that at least 134 civilians were killed and 289 more were wounded in Taliban attacks in the last 25 days.