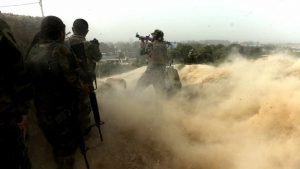 At least seven security personnel and 21 Taliban militants have been killed during a clash in the Imam Sahib district of northeastern Kunduz province, officials said according to pajhwok.com.

Meanwhile, resident Aminullah urged the government to conduct a clearing operation against the militants in the district. Causalities were on the rise in clashes in the area, he added.