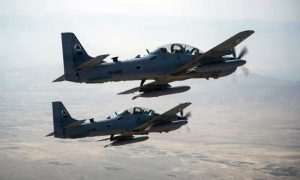 Six Pakistani members of al-Qaeda on the Indian Subcontinent, along with eight Taliban members were killed in airstrikes on hideouts on Wednesday in Helmand Province, like reported by ariananews.af.

According to the Ministry of Defense, a local al-Qaeda leader, Abbas, was among those killed in the airstrikes on Nawa district of Helmand.

A prominent Taliban commander, Mullah Shafiq, was also resportedly wounded in the airstrike – along with four other insurgents, the ministry said.

The Taliban pledged last year – when signing the US-Taliban agreement in Doha – to cut all times with al-Qaeda. However, in a UN Security Council report released on Wednesday, UN Monitors found the group not only poses an expanding threat to the Afghan government but that it remains close to al-Qaeda.

The two groups “show no indication of breaking ties,” even if they have temporarily tried to mask their connections, according to the report, although it notes that the Taliban calls this “false information.”

According to the UN report, 2020 was the “most violent year ever recorded by the United Nations in Afghanistan.”

But security incidents have risen over 60% in the first three months of 2021 compared to the same period in 2020.