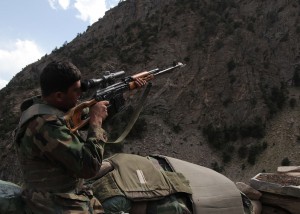 At least 58 armed Taliban fighters were killed and 29 others were wounded in different crackdowns within past 48 hours.

In a press release issued here, Ministry of Interior (MoI) said that Afghan National Army  (ANA) in collaboration with Afghan National Police (ANP) and National Directorate of Security (NDS) has conducted clearance operations against insurgents in different areas of Baghlan, Takhar, Kunduz, Faryab, Sar-e-Pul, Kandahar, Uruzgan, Paktiya, Zabul, and Helmand provinces. In these operations 41 rebels were taken out and 16 others injured.

Meanwhile, the defense ministry in a statement said that 17 militants were killed and 13 others wounded in joint operations in Paktia, Nangarhar, Kunduz, and Kandahar provinces.

The ministry claimed of detaining 21 insurgents in the crackdowns. ANA and ANP recovered huge cache of weapons in the operations as well, the statement said. Five ANA soldiers were killed in roadside bombing and rockets shelling in different provinces.