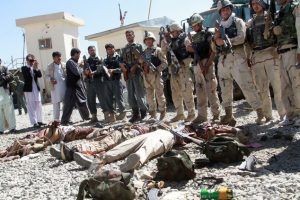 At least 57 Daesh and Taliban militants have been killed airstrikes and a ground operation in different areas of eastern Nangarhar province, an official said on Thursday according to pajhwok.com.

The joint Afghan-US air and ground offensives were conducted during the past 24 hours. Twenty-seven Daesh rebels were killed in Kot district by Afghan troops, the 201st Selab Corps in the eastern zone said in a statement.

Separately, 24 Taliban were killed and four others wounded during a US drone strike in the Pirkhel area of Khogyani district, the provincial police spokesman said.

Hazrat Hussain Mashriqiwal told Pajhwok Afghan News that the Taliban chief for Chaparhar district and three notorious commanders were among the dead.

Separately, six Daesh insurgents, including three foreigners, were killed during US drone strikes in Awghaz and Spenzhay areas of Haska Mena and Nazyan districts, Mashriqiwal said.

He added a large quantity of weapons and ammunition were also destroyed as a result of the operation. However, he did not say anything about casualties among security forces and civilians.