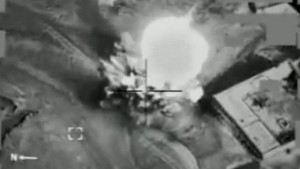 At least 56 Taliban and Islamic State (IS) fighters have been killed in barrage of drone strikes in eastern Nangarhar province, an official said Wednesday.

At least 40 Taliban and 16 IS fighters were killed and four cars of the rebels were completely damaged in the attacks, he said. Civilians suffered no casualties.

An official wishing to go unnamed said two notorious IS commanders were also among the dead. He said more than 25 IS fighters were possibly killed in the assault.

Mohammad Anwar, a resident of the district, said a clash also took place two days ago between IS members and Taliban. He confirmed the drone strikes but was unaware about the casualties.

Taliban militants and IS have not yet commented on the missile strike.

US drone strike had inflicted heavy casualties on Taliban militants and IS fighters in Nangarhar province over the past four months.

Haska Mina district is a known hub for anti-state elements.