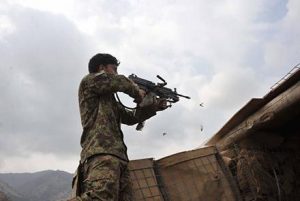 At least five Taliban insurgents were killed in clashes with security forces in central Wardak province on Wednesday, local officials confirmed to tolonews.com.

In addition, four other insurgents were wounded.

The clashes took placed in Check district of the province after a group of Taliban insurgents attacked police check posts, a spokesman for the provincial governor, Naqibullah Amini, said.

“In a separate incident, Taliban fired a missile in the city which killed two civilians,” Amini said.

He did not provide further details over the attacks.

The Taliban has not yet commented on either of the attacks.