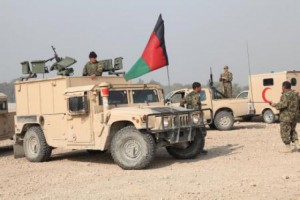 Five soldiers embraced martyrdom due to terrorist actions while 72 militants were killed in separate military operations in past 24 hours, a statement issued Monday morning by the Ministry of Defense states.

General Zahir Azimi, Ministry of Defense spokesman writes in the statement that the five soldiers embraced martyrdom due to an explosion and militant fire.

Azimi’s statement does not contain information about the exact location of the terrorist actions.

He also writes that 72 insurgents were killed during operations conducted by security forces in past 24 hours.

48 militants wounded and three others arrested during these operations, the statement adds.

Afghan National Security Forces are engaged in large scale military operations in different parts of the country at the time.