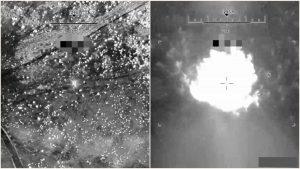 The Afghan Military claims that the airstrikes in western Farah province have left at least 46 militants dead while 38 thousand kgs of explosives have been destroyed, like reported by khaama.com.

The 207th Zafar Corps of the Afghan Military in the West in a statement said the airstrikes were carried out in the vicinity of Khak Safid district.

The statement further added that 46 militants were killed and 6 others were wounded during the same airstrikes.

According to 207 Zafar Corps, at least five vehicles, 2 motorcycles, and 38 thousand kilograms of explosives were also destroyed during air raids.

Farah was among the relatively calm provinces in West of Afghanistan but the security situation of the province has deteriorated during the recent years.

The Taliban militants are active in some districts of the province and often carry out attacks against the government institutions and security forces.