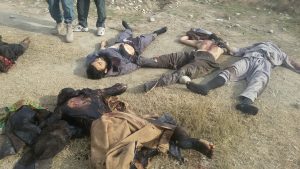 Fierce clashes between Taliban and Daesh rebels left at least 27 fighters dead, while another 15 Daesh rebels have been killed in drone strike in eastern Nangarhar province, local officials claimed like reported by pajhwok.com.

He said 27 IS militants were killed, three others wounded during the past 24 hours in Awghaz and Kundai Bagh areas, and there was no report about the Taliban casualties, he added.

Elsewhere, 15 Daesh were killed during the US drone strike in Speen Jomatt area of Chaparhar district late on Monday night, the governor’s spokesman Attaullah Khogyani said.

There was no word about the clashes and drone strike from Daesh group.

Earlier, a nine year-old girl was killed five other civilians wounded during firefight and seven houses were torched by militants and many families displaced from the area due to clashes.