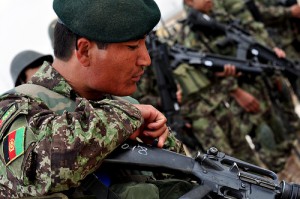 40 insurgents were killed and wounded during Operation Zulfiqar in southern Helmand province in past 24 hours, a statement issued by the Ministry of Defense on Tuesday stated.

According to the statement 33 insurgents were killed and seven others wounded in Operation Zulfiqar during the past 24 hours.

One soldier from Afghan National Army also embraced martyrdom due to a landmine explosion in Operation Zulfiqar in past 24 hours, the statement adds.

MoD statement further adds that eight Improvised Explosive Devices (IEDs) were also discovered and defused by the security forces during the operation in past 24 hours.

In Past 24 hours two explosions claimed the lives of nine people and left five others wounded.

Seven civilians all from same family were killed after their vehicle ran over a landmine in Andar District of Ghazni province yesterday afternoon. A man, three women and three children were killed in the explosion.

Another explosion took place closed to a security check point in Khogyani district of eastern Nangarhar province last night which claimed the lives of two policemen and left five others wounded.